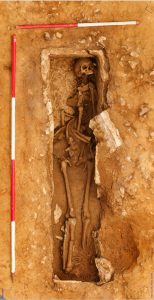 Archaeologists made a remarkable discovery at Woodsford Quarry when excavations revealed the skeleton of a Roman man who had his feet bent backwards to fit in his coffin.

Experts from Thames Valley Archaeological Services (TVAS), who are working for Hills Quarry Products, have carried out painstaking excavations at the Dorset site over several years.

These excavations have revealed the land was farmed and used as a settlement as far back at the Bronze Age – around 4,000 years ago.

There have also been finds which date from the Late Iron Age to the Roman periods, roughly between the first century BC to the fifth century AD.

But the most exciting discovery unveiled itself during the summer when archaeologists uncovered a grave of about 1.80m long, 0.55m wide and 0.3m deep, set in a stone sarcophagus – a type of stone coffin typically associated with ancient civilisations.

The coffin would have had a lid, but this has not survived due to centuries of ploughing. The sarcophagus had been crudely carved out of a single huge block of limestone.

The TVAS team carefully emptied the grave to reveal the well-preserved bones of a man in his late 20s or 30s.

The buried man would have been about five foot 10 inches tall and an initial examination of the bones revealed no signs of disease or other unusual conditions – but further tests will be carried out in which may reveal more about the fate of the man in this unusual grave.

The grave is set in the midst of at least 11 other burials – although none of the others have sarcophagi. Archaeologists have confidently dated the graves to the Roman period.

No bones survived in the other graves, but the protective effect of the sarcophagus preserved the bones in this grave.

Director of TVAS, Dr Steve Ford, explained why this was such a significant find. He said: “In the Roman period, burial in a sarcophagus was moderately common in Italy but very unusual in Britannia, where even wooden coffins seem to have been rare.
“A stone sarcophagus was certainly a very prestigious item, and their distribution across the country is restricted. Only around 100 are known and it is believed that this might be only the 12th to come from Dorset, with 11 others all from Poundbury.
“It is possible that the practice reflects a folk memory of a longer tradition in the South West, however, where stone lined cist burials can be traced back to the New Stone Age around 3000 BC.
“In fact, this sarcophagus may have been reused, as it was several centimetres too short for the corpse, whose feet had to be tucked under him.”

Andrew Liddle, divisional director of Hills Quarry Products, said: “Hills is pleased to support the archaeological community and provides resources for excavation at all of our quarry sites.
“We work closely with teams like TVAS to make sure any finds of historical or archaeological significance are discovered and preserved for future generations to enjoy.
“We were very interested to learn of this discovery at Woodsford and we are very proud of our relationships with TVAS and other similar organisations. We will continue to support them at Woodsford and other sites.”
After the skeleton is analysed by experts it will be donated, along with all of the finds from the site, to Dorchester Museum with kind permission from the landowner.