Through the Landfill Communities Fund, Hills has granted Cotswold Lakes Trust a further £12,000 for this year which adds to a total of £69,000 of funding towards their Water Vole Project over the past six years. 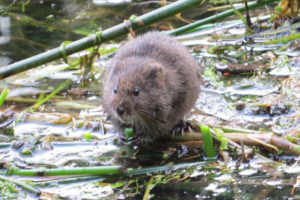 Kim Milsom, Biodiversity Field Officer at Cotswold Lakes Trust gives an update on the project: “Water Voles are still the country’s fastest declining mammal, largely due to predation by American Mink, which escaped, or were released from fur farms many decades ago. Before the arrival of Mink, Water Voles were a widespread and common sight along our waterways; but, such was the decimation, they disappeared entirely from some counties.”

Kim continues: “In the Cotswold Water Park a few small populations of the voles continued and a project to protect them and encourage their population increase was initiated by the Cotswold Lakes Trust. The continuation of this vital work has been partly funded for a number of years by Hills through the Landfill Communities Fund and has been very successful.”

Positioning rafts, which use clay to record the footprints of animals which walk over them, is the main approach for monitoring Mink. When Mink footprints appear on these rafts, cage traps are set and then regularly checked. This approach has removed large numbers of Mink from our area and continuation of the project keeps their numbers suppressed to a level whereby they have only a minimal impact on the Water Voles and other waterside wildlife. As a direct result of this, Water Voles have now undertaken a considerable range expansion in the Cotswold Water Park; particularly along the many small rivers which flow through the area. They can also be found in some gravel pits and sections of the Thames and Severn Canal. The funding also allows Cotswold Lakes Trust staff and volunteers to monitor their range expansion and population density by carrying out regular surveys.

Water Voles require vegetation along waterways to provide food and cover from predators. If long stretches of a river are heavily over-shaded by trees and bushes, bankside and aquatic vegetation is suppressed, as it requires sunlight to flourish. This can create a barrier to the expansion of the Water Vole population. The Cotswold Water Park Trust Ranger Team, along with groups of keen volunteers thinned out or removed trees to allow a healthy amount of light back into the river and, within a couple of years it is hoped that plant growth will return and transform the waterway.

“The Cotswold Lakes Trust is grateful for the support of its project funders, volunteers, and landowners, without whom our local Water Vole population may inevitably slide back into decline.”